As the Administration has promised that various reports will be soon declassified and made available for us to read, we will finally be able to see, with certainty, (no 'anonymous' sources, but actual documentation) the shenanigans some of the higher-ups in the FBI, CIA, and DOJ have been carrying out, I am here re-posting a previous cartoon story, colored and reworked, that is even more relevant today. 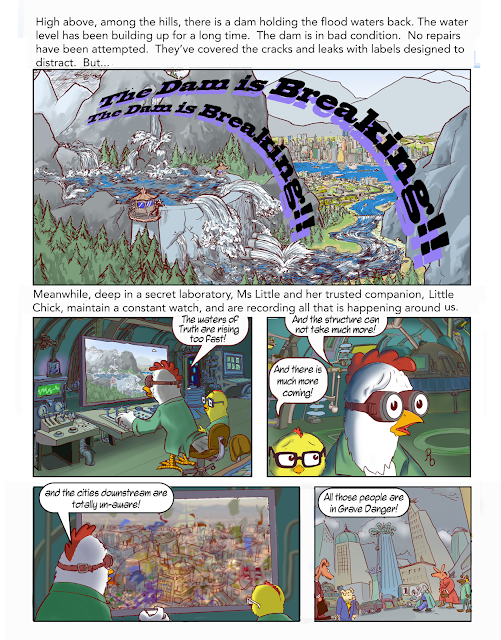 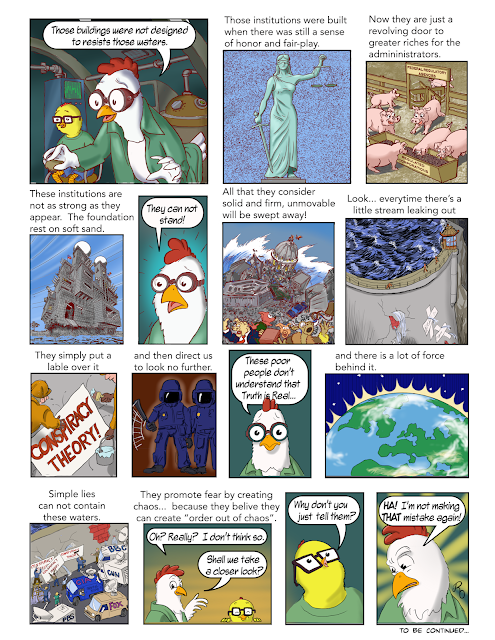 We are witnessing the completion of the American Revolution.
This is what I see happening (click image to see a higher resolution image): 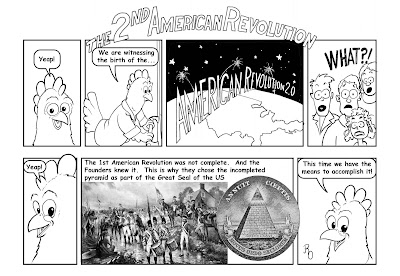 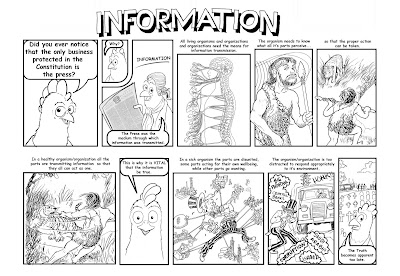 What is the “Media”?

What is “The Main Stream Media”?

Media is the plural of Medium.

1 An agency or means of doing something.

1.1 A means by which something is communicated or expressed.

2 The intervening substance through which sensory impressions are conveyed or physical forces are transmitted. 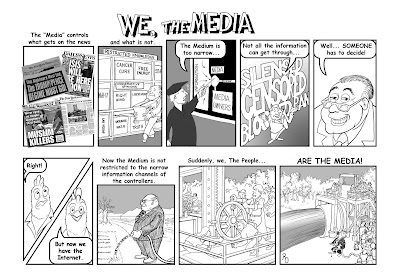 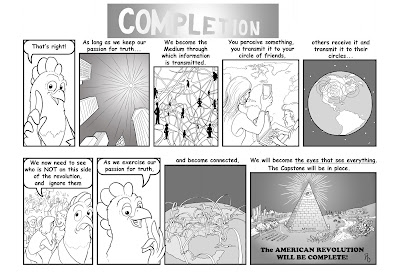 The “Media” is changing.

The good thing is that information is now more available than ever.

The bad thing is that we are going to need to do more work to get the real information.

I am making a video based on this story.  I would appreciate it very much if you'd tell me if I should change or add anything.  Your feedback will be well appreciated.  This will be the continuation of my previous video on this subject)

Here are some samples of the New Media (there are many more):


Here are a few of my favorite, reliable, sources of information are:

The No Agenda Podcast. - The Best Podcast of the Universe.
The Corbet Report
Newsbud
American Intelligence Media
Consortium News
Tracy Beanz (with a z)
We Are Change

Posted by Robert at 5:14 PM No comments:

Our personal concept of what is Real ‘out there’, is formed, mostly, by what we get through the Media, and it is obvious that there is a tremendous battle for our mind (and soul) going on.  Misinformation and propaganda is thick and confusing for most of us.  I will be making a series of very short videos, describing, in the most simple terms I can think of, what it seems to me is going on, and want to put it out there to see if similar thoughts are bubbling with you. 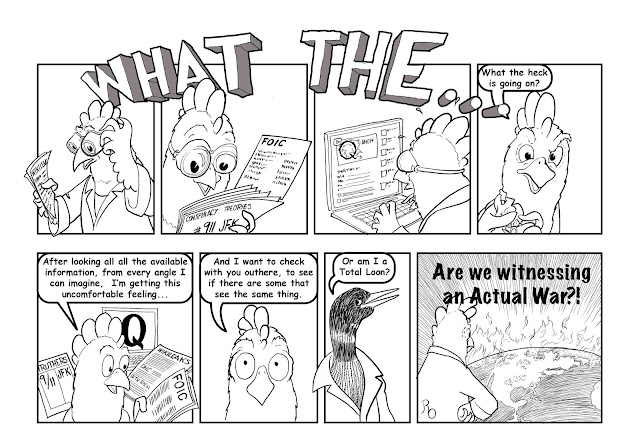 
This is a continuation of a ‘story’ that I started in December 2016.  http://weneedanewkindofmoney.blogspot.nl/2016/12/the-further-adventures-of-ms-little.html

Here are a few of my favorite, reliable, sources of information:

The No Agenda Podcast. The Best Podcast of the Universe! http://noagendanewsnetwork.com/

Tracy Beanz (with a z) https://www.youtube.com/channel/UC98Zwfvjq12M1oi99Yqd78w

Posted by Robert at 3:19 PM No comments:

Can we just get along? 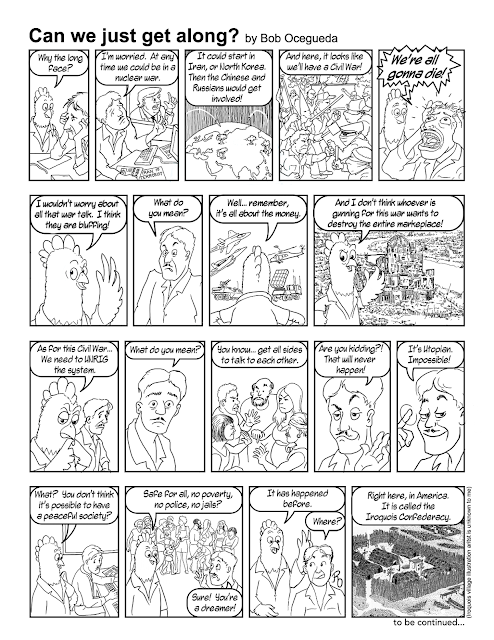 (click on image to view a larger version)
When the Europeans landed in the Norther parts of the American continent, they arrived in a land populated by many different Indian nations.  Because of their strategic location between the English and French settlers, the Iroquois Confederacy,  a 5 tribe group organization that had been living in peace and harmony for over 200 years already, the Iroquois became well know and respected by English government officials.  There were around 5,500 people that lived in a prosperous land, with no poverty, no police force, and no jails. They are the ones that taught the Europeans how they could become strong if they united, the 13 colonies, into one nation.  Benjamin Franklin and other Founding Fathers of our republic were inspired by the Iroquois form of government.   (For an excellent introduction to this subject check out this free online book The Forgotten Founders)

This is the first page of a series exploring this forgotten story.  Perhaps we can still learn something relevant to our troubled times from this ancient culture.

Please let me know your thoughts in the comments below and subscribe if you see fit.

Bob
Posted by Robert at 3:50 AM No comments:

16th Anniversary is upon us! 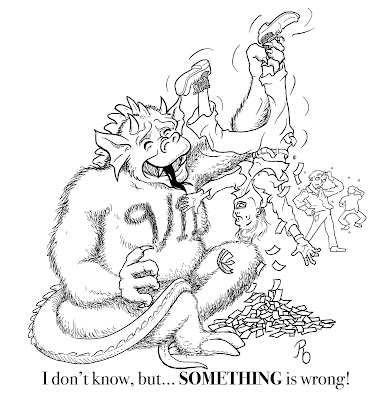 16 years since that event took place, and I am amazed at how many people still believe the fairy tale the officials gave us!  "They attacked us because they hate our freedoms!"  JEEEZZUS!!!  This is right out of a comic book reality.  If that were right, the terrorists would be very happy now, since we've been steadily loosing all those freedoms since them.  And all through lies, or, as it's called now a days, Fake News.

Because we, as a society, did not demand the truth, and were comforted by inane lies and entertaining distractions, we are now confronted by a social structure in disarray, with some even calling for a new civil war.

But that, as well as the fraudulent "War on Terror", is a manufactured event, designed, promoted, and maintained by those who would profit from it.

However, we the people, have much more that unites us than divides us, with similar needs and desires, and we can find that out if we follow what is true, what can be documented and verified.  What we perceive to be the truth, not what we are told to believe.

Below are sources for several good healthy portions of this truth:


These, together with the other events I've mentioned before, First Annual 9/11 Activist Summit, and A New ERA - 2017 (#UNRIG), gives me hope be happy and optimistic.  This could be a very good time for healing, to start healing process, for righting the disastrous and ominous course the ship of State has taken.  But we'll need to move, to act, and make a difference.

Lets go forward then, in peace and with optimism. 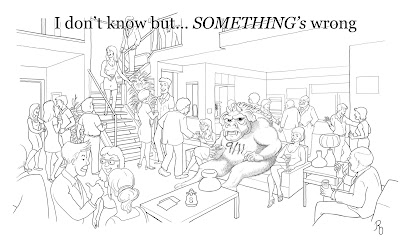 (click on the drawing to see a higher definition image)

Yes, we can safely say that 9/11/2001 was the point of departure on a new trajectory for our nation and the world.  Since that fateful day, we seem to be in a constant decent into insanity.  Like we are in a feverish delirium induced by some mysterious and deadly pathogen, that is tearing our social flesh apart, creating horrible visions of pain and suffering.

We can see the effects of this ailment all around us, but it is difficult to see the source of it.  This pathogen is very clever, resourceful and almost omnipotent, keeping us constantly in a state of fear, and distracted with an unending stream of lies, distortions. and misinformation.

However, it is not immune to the disinfectant function of the light of truth, and some day, hopefully in the very near future, when enough people have been inoculated with the only true medicine for this nefarious creature, truth and common sense, this nightmare will come to an end.

For a good dose of truth serum, NewsBud has organized a webinar with some of the top truth tellers on the day before the 16 anniversary of this "2nd Pearl Harbor":


Become strong with the latest information.  This conspiracy fact must be exposed far and wide, as it makes up the foundation of most of the problems we are facing.

Posted by Robert at 6:46 PM No comments:

#UNRIG is promoting an idea that I believe it's time has come.

It is called the Electoral Reform Act of 2017. I think that if it's 12 points were to be implemented it would allow us to have a government that would work for us, the way it's supposed to be.  That would work for the people.  Like it was for the original Americas.  The ones who taught the European newcomers, the intelligent ones, how they could live in peace with in a group of tribes.

When the Europeans landed in the Norther parts of the American continent, they arrived in the land of a the Iroquois Confederacy, 6 nations that had been living in peace and harmony for over 200 years already.  There were over a million (?) people that lived in a prosperous land, with no poverty, no police force, and no jails. They are the ones that taught the Europeans how the could become strong if they united, the 13 colonies, into one nation.   (For an excellent introduction to this subject check out this book The Forgotten Founders)

The new Electoral Reform Act of 2017 calls for 12 points that need to be implemented.   I believe that if these changes were implemented we could have one of those governments. The one that works for the people, that is, it has integrity to it’s purpose.

Here are the points (click on the image for a larger version):

Since the election integrity is the most important factor in our Republic, there is… Voting System.

There are several other points. Check them out at #UNRIG.

Cynthia McKinney and Robert Steele are touring the country promoting these changes with all factions of the political spectrum. I believe these changes would give us the possibility of having a government with integrity, of the people, by the people and for the people. Like it was meant to be.

I know it seems impossible. You may say: “The powers that be are not going to give up their privileges just like that, with no violent suppression on their part.”

In the past I would have agreed, but we are now in a new era, or Baktun, as the Mayas called it, and what was previously impossible is now happening before our eyes. You can see it all around.

Bob
Posted by Robert at 3:12 PM No comments: